South Pacific is a 1958 American romantic musical film based on the Rodgers and Hammerstein 1949 musical South Pacific, which in turn is based on James A. Michener's short-story collection Tales of the South Pacific. The film, directed by Joshua Logan, stars Rossano Brazzi, Mitzi Gaynor, John Kerr and Ray Walston in the leading roles with Juanita Hall as Bloody Mary, the part that she had played in the original stage production. The film was nominated for three Academy Awards, winning the Academy Award for Best Sound for Fred Hynes.

The plot centers on an American nurse stationed on a South Pacific island during World War II, who falls in love with a middle-aged expatriate French plantation owner but struggles to accept his mixed-race children. A secondary romance, between a U.S. lieutenant and a young Tonkinese woman, explores his fears of the social consequences should he marry his Asian sweetheart. The issue of racial prejudice is candidly explored throughout the musical, most controversially in the lieutenant's song, "You've Got to Be Carefully Taught". Supporting characters, including a comic petty officer and the Tonkinese girl's mother, help to tie the stories together. 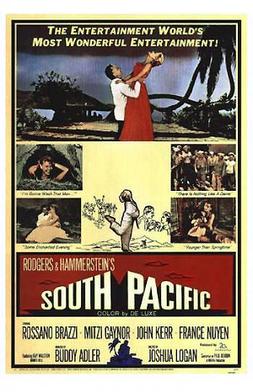 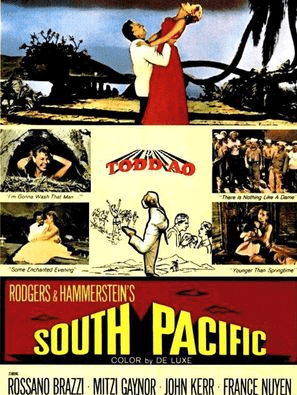